I had heard of lakes where the fish jump into your boat, but this was ridiculous. 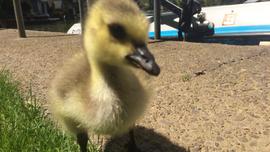 Out on the water in Mike Jivanjee’s boat, a ten-pound Canadian goose flew right in.

Her name is Kyle, and she has a huge crush on Mike. The two live on Lake Oswego, Oregon, outside Portland.

Every day, Mike tries to tell her it’s over. And every day, Kyle says ‘No, it’s not.’

Kyle first fell for Mike two years ago as a gosling, after she was abandoned by her mother.

“One of my friends noticed her drowning in the water, like almost desperate, alone,” Mike said. “At any minute she would have been run over by a boat.” 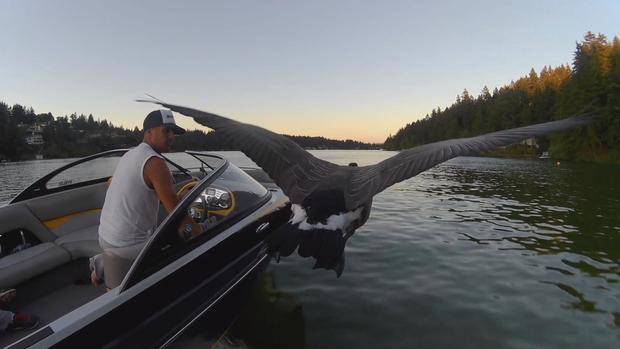 “I just figured I would keep it alive long enough to be an adult and to fend for itself,” he said. And then the goose would go on her way.

But that’s not how it worked out.

“I’ve tried to get rid of her, you know. I’ve driven her miles away and then left her in the middle of nowhere and when I come back she’s already home before me, so there’s not a lot we can do” Mike said.

It is apparent that the goose has left an imprint on him.

Even when we went to a coffee shop in town, Kyle was right on his heels. And Mike says she would have stuck even closer if I was a woman.

“When girls come around and she senses they’re a threat, she lets them know,” he said. “She’s smart enough to know actually who the threats are and who they aren’t.”

And if truth be told, at this point, Mike is equally smitten. Today their little cat and mouse game is just that — a game, a chance for Kyle to get some exercise, and for Mike to enjoy an incredibly close encounter with an incredibly trusting friend. 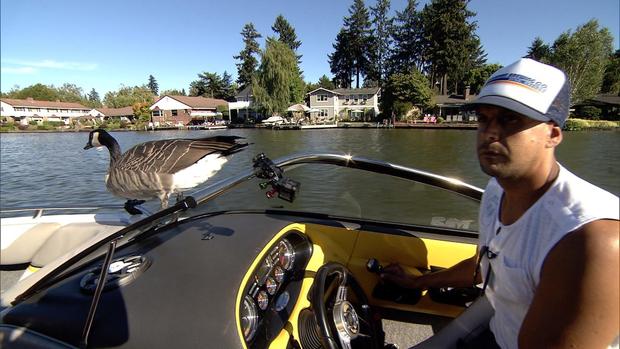 Kyle really is beak-over-tail-feathers for this guy. But she’s not taking any chances, either.

To see more of Mike and Kyle’s adventures visit their page on Instagram @kylethegoose.

Your Horoscope for the Week of June 10

These Zodiac Signs Are Going To Have The Best Summer Ever, So Embrace The Good Vibes

Richard Branson Is Offering An Amazing Job On Necker Island