All dogs should be celebrated. End of. These furry balls of joy truly deserve their title of ‘man’s (and woman’s) best friend’ – they’re loyal, intelligent, affectionate and endlessly entertaining.

However, sadly in some places of the world dog meat is still considered a delicacy, an issue that was highlighted this week thanks to Olympic skier Gus Kenworthy.

Gus, who is currently competing in the 2018 Pyeongchang Winter Olympics, proved to be a strong contender for ‘hero of the year’ after he and Humane Society International managed to convince a South Korean dog rancher to shut down his farm.

In a lengthy Instagram post, Gus highlighted the inhumane treatment of dogs in the region, stating that while “It’s not my place to impose western ideals on the people here… the way these animals are being treated, however, is completely inhumane and culture should never be a scapegoat for cruelty.” 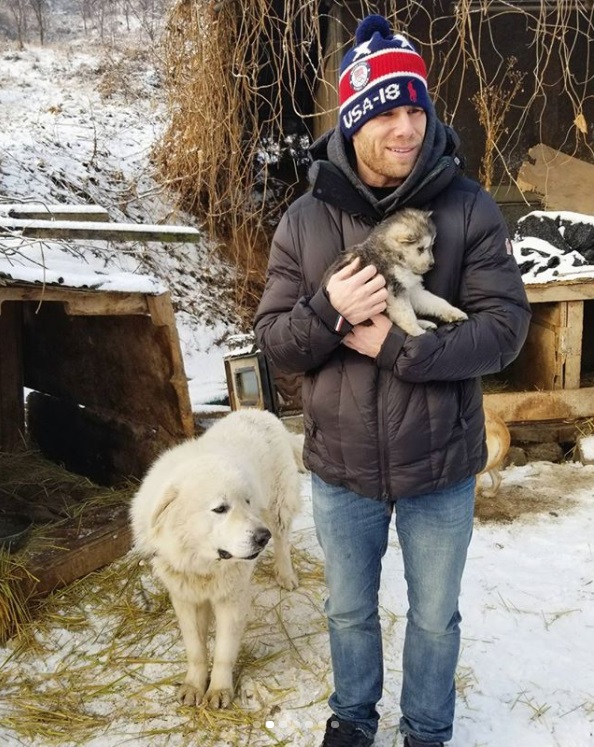 In partnership with the Humane Society International, the Olympian managed to save the lives of over 90 canines.

It just warms the cockles of your heart, right? Well just wait, because this story gets even better. The Evening Standard reports that only did Gus help to save these puppies from the slaughterhouse, but he’s also planning on shipping them back to find homes in the US and Canada and he’s adopted a girl pup named Beemo.

This morning Matt and I had a heart-wrenching visit to one of the 17,000 dog farms here in South Korea. Across the country there are 2.5 million dogs being raised for food in some of the most disturbing conditions imaginable. Yes, there is an argument to be made that eating dogs is a part of Korean culture. And, while don’t personally agree with it, I do agree that it’s not my place to impose western ideals on the people here. The way these animals are being treated, however, is completely inhumane and culture should never be a scapegoat for cruelty. I was told that the dogs on this particular farm were kept in “good conditions” by comparison to other farms. The dogs here are malnourished and physically abused, crammed into tiny wire-floored pens, and exposed to the freezing winter elements and scorching summer conditions. When it comes time to put one down it is done so in front of the other dogs by means of electrocution sometimes taking up to 20 agonizing minutes. Despite the beliefs of some, these dogs are no different from the ones we call pets back home. Some of them were even pets at one time and were stolen or found and sold into the dog meat trade. Luckily, this particular farm (thanks to the hard work of the Humane Society International and the cooperation of a farmer who’s seen the error of his ways) is being permanently shut down and all 90 of the dogs here will be brought to the US and Canada where they’ll find their fur-ever homes. I adopted the sweet baby in the first pic (we named her Beemo) and she’ll be coming to the US to live with me as soon as she’s through with her vaccinations in a short couple of weeks. I cannot wait to give her the best life possible! There are still millions of dogs here in need of help though (like the Great Pyrenees in the 2nd pic who was truly the sweetest dog ever). I’m hoping to use this visit as an opportunity to raise awareness to the inhumanity of the dog meat trade and the plight of dogs everywhere, including back home in the US where millions of dogs are in need of loving homes! Go to @hsiglobal’s page to see how you can help. #dogsarefriendsnotfood #adoptdontshop ❤🐶

This isn’t the first time Gus has saved the day either. Back in 2014, while competing at the Sochi games in Russia, he drew global attention for saving five stray dogs that were roaming the streets.

His boyfriend at the time, Robin Macdonald, stayed in Russia for an extra month to take them home. It’s no surprise that the skier has been hailed Inspirational Honoree by The Humane Society of the United States.

While this story has a happy ending, Gus points out that there are still millions of dogs out there that are suffering from mistreatment.

While South Korea adopted its first Animal Protection Law in May 1991, it never prohibited the killing of dogs for meat, meaning there are no regulations when it comes to how dogs are slaughtered.

Thankfully, the practice does seem to be dying out in the country, as outlined by a 2017 study that showed the number of dog meat farms dropped from 17,000 to 2,800 in just two years.

Hopefully within the next few years this number drops to 0.