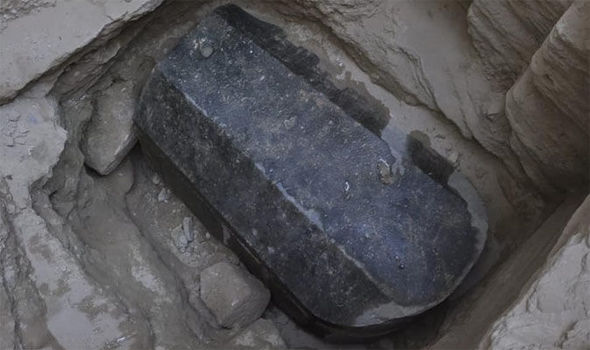 Brendan Fraser warned us. He specifically told us not to piddle about with ancient, creepy tombs through the medium of quippy, pun-stuffed action movies.

And yet here we are, cracking open a sinister as heck black sarcophagus like a gruesome easter egg and throwing all caution to the Imhotep shaped sandstorm.

I for one was nervous, as were the many, many people warning of the potential curse which would surely be provoked by such an intrusion.

An all black sarcophagus was discovered in Egypt. It dates back ~2000 years and was found with an alabaster head. Alexander the Great’s body was never found and was rumored to be buried in this area…. I wonder…? pic.twitter.com/uoXwuCp0wR

After biting our nails for days, the 30-tonne box speculated to hold Alexander The Great’s remains has now indeed been opened, found to contain three decomposed mummies and filthy sewage water.

The 2,000-year-old box was found in Alexandria during an evacuation, situated right beside a huge alabaster head, and archaeologists held out high hopes for its historic significance.

However, there is nothing to suggest the remains found here are in any way related to the ancient king.

Secretary-General of the Supreme Council of Antiquities Mostafa Waziri has explained how none of the three skeletons are thought to have belonged to a Ptolemaic or a Roman royal family.

Waziri has also revealed how no silver or gold metallic masks, small statues, amulets or name inscriptions were discovered within the 6 foot tall sarcophagus.

After watching the news this week, I’d just like to pledge my loyalty in advance to whatever’s inside the giant black sarcophagus.

Preliminary examination suggests the skeletons belong to three army officers, one of them his skull shows an injury of an arrow.

And Waziri has also been able to answer the question on everyone’s lips:

The sarcophagus has been opened, but we have not been hit by a curse

No matter how bad the world gets, sometimes I just look up and thank my lucky stars that I was blessed to live on Earth during a time when archaeologists have found and plan to open a massive black sarcophagus virtually guaranteed to destroy us all.

Although the thick layer of mortar coating it suggests the sarcophagus has never been opened, a crack has allowed sewage water to seep inside; ruining the condition of the mummies.

The bodies will now be removed from the site and taken to the National Museum of Alexandria where experts will work to establish the cause of death, ages, face shapes and historical era.

Once inspected and checked over, the granite sarcophagus will also be removed from the site.

The inhabitants of the tomb appear to have held their wrath, with no plans as of yet to send clouds of scarab beetles chasing archaeologists through the desert.

However, some people are still very nervous about the whole carry-on.

Please listen very carefully! A Sarcophagus with this kind of weight and a lid that heavy is made for one reason!

To keep whatever spirit in there from ever getting out. Leave the dead ! Dead! stop Desecrating my Ancestors.

You are dealing with things you have no control of, nor will you be able to control. Let it be!!!!!!

Opening that 2000 year old sarcophagus they found in Egypt could be the death of us all.

Socrates Was One Of The Smartest People Who Ever Lived. Here Are 24 Out Of His Most Important Quotes That Everyone Needs To Read