Keanu Reeves, who has kept his personal life private during his long career, has gone public with new girlfriend Alexandra Grant.

For 35 years, the actor has never been affectionate with a woman while on the red carpet.

But that has changed recently as the new pair held hands at the LACMA Art + Film Gala Presented By Gucci in Los Angeles. 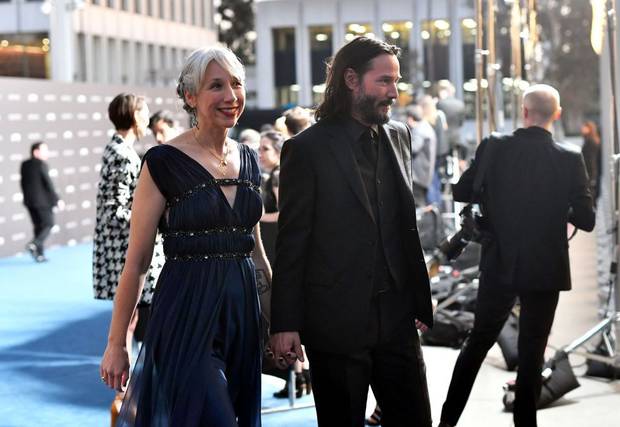 Dozens of photos show that the couple never let go of each other, proving they had nothing to hide in front of the international press.

Keanu, 55, and Alexandra, 46, collaborated together on the books Ode To Happiness and Shadows. They also have a publishing house X Artists’ Books.

For weeks it had been rumoured Keanu has gotten serious with the artist when paparazzi captured the pair arm in arm as they left a sushi bar on Sunset Boulevard in Los Angeles in mid-October.

Alexandra was also seen resting her head on Keanu’s shoulder as they strolled. It has been decades since Keanu has been in a serious, public relationship.

Previously, he was linked to Amanda De Cadenet, Sandra Bullock and Claire Forlani but it’s not known how serious he was with them.

In the 80s he dated Jill Schoelen, but for most of the 90s he was with Jennifer Syme.

Keanu and Jennifer almost had a child together in 1999 but the baby – they named Ava – was stillborn at eight months.

In 2001, Jennifer died at 28, after she crashed her 1999 Jeep Grand Cherokee into a row of parked cars in Los Angeles.

Pick a Star to Receive a Message