When Samantha Smart and her family heard a tiny kitten meowing around their Florida neighborhood for days, they knew they had to help him.

“It wasn’t just a meow, it was a sad little cry,” Smart told The Dodo. “He had the whole neighborhood working together to find and trap him. We have one cat already so we weren’t really looking to add another, but it felt like Ponyo was meant for us!” 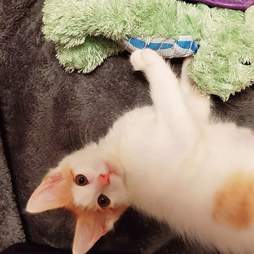 The family knew right away that Ponyo wasn’t going anywhere, and they officially adopted him. They quickly went about helping him get settled into his new home, and Smart’s daughter decided he needed his own special stuffed animal to make him feel cozy and safe.

“My daughter Violet spent a while picking out the perfect friend for him to sleep with and settled on Dragon,” Smart said. “He sleeps with Dragon every night and spends a lot of his time dragging him around the house!”

When it was time for Ponyo to get neutered, his family knew he might be a little nervous about going to the vet — so they decided to send his dragon along with him.

Ponyo went to Operation Catnip, a spay-neuter organization that focuses mainly on unowned, free-roaming community cats, to get neutered. As soon as he arrived, everyone there fell in love with the tiny kitten hiding behind his beloved stuffed dragon for comfort. 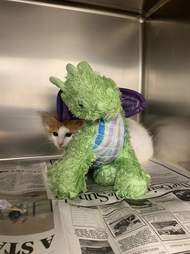 “When Ponyo arrived at the clinic, he was very nervous,” Melissa Jenkins of Operation Catnip told The Dodo. “We all noticed his sweet dragon friend in the carrier with him, so we put the dragon in the kennel with him. Ponyo hid behind the dragon at first and clearly took comfort in it.”

Everyone could see that Ponyo’s stuffed dragon made him feel a little safer while he was in a new place — so they decided to make sure his toy stayed by his side the entire time.

“We thought it would be really great to send the dragon on the same journey through the clinic as Ponyo, so we had fun giving the dragon the identical services,” Jenkins said. 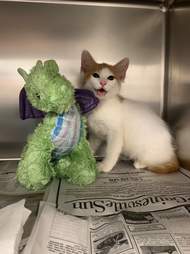 Every step of the way, Ponyo’s dragon was right there with him, and as soon as he woke up from his surgery, his beloved dragon was the first thing to make him feel better. 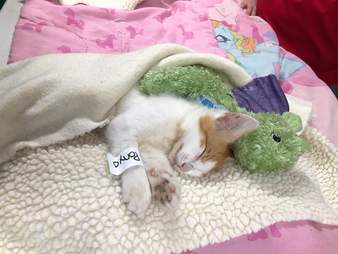 “As Ponyo was waking up from anesthesia, he meowed and was understandably confused, so we made sure his dragon was close by to offer him some comfort,” Jenkins said. 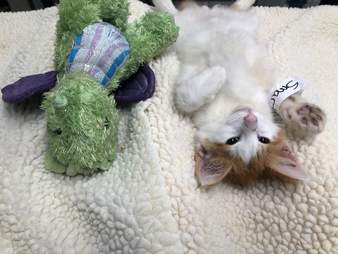 Ponyo was understandably nervous when he first arrived at the vet, as he’d already experienced so many new things in such a short time, but his dragon helped him stay calm and brave — and there’s no doubt that Ponyo and his dragon will be best friends for a very long time. 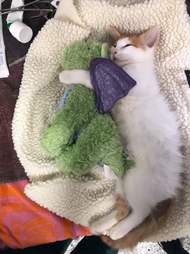 The Nose Knows: What Your Nose Shape Can Reveal About Your Personality